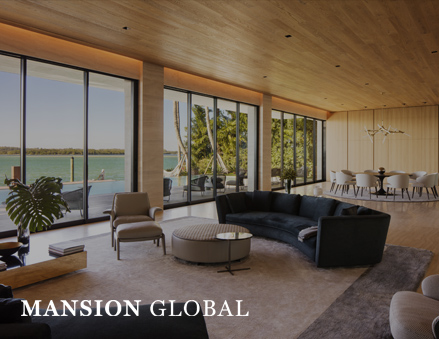 Listing of the Day

This contemporary house sits about 300 yards from Baker’s Haulover Inlet, one of only two inlets in Miami Beach where the ocean meets the bay.

If you’re a boater, you have instant access to the ocean, said listing agent Oren Alexander of Douglas Elliman. “If you’re a swimmer, you always have clear, clean water to swim in,” he said.

There is also a natural sandbar there that you can swim or paddle to from the house, he said.

“It’s the best of both worlds—you’re in a tropical oasis yet within an urban environment,” Mr. Alexander said.

“The house is contemporary yet classic,” he said. “It’s extremely symmetrical and balanced.”

The scale of the house is quite large. The main living room measures about 80-feet-by-25 feet, he said, with a full wet bar tucked behind oak paneling.

The master suite is “almost 3,000 square feet and spans the whole width of the house and includes his-and-hers wings,” Mr. Alexander said.

The house has a terrific indoor-outdoor feel, he said. “We have a window wall system that, with the push of a button, it all disappears” into pocket recesses.

Because the house sits so close to where the bay meets the ocean, there is an abundance of sea life, he added. “You can count on seeing dolphins at almost every sunset.”

“Chad is known for designing some of the best modern homes in the world,” Mr. Alexander said.

“What’s great about Chad is that he lives in Miami Beach on the water, so he understands the interaction with the outdoors,” he said. “He has created something that feels natural with the environment.”

The landscape design is by Fernando Wong.

“The plantings are extremely lush and subtropical,” Mr. Alexander said. “There are probably over 100 different specimens of plants.”

The primary amenity is the 75-by-17-foot infinity-edge pool that sits between the house and the bay.

“The pool has a glass wall to give it an aquarium-like feel,” Mr. Alexander said.

The house also features an outdoor summer kitchen and a rooftop “sky bar” with a fire pit, overflowing Jacuzzi and a full bar with a gas grill.

Other amenities include Roman travertine floors, a private dock, a second-floor art gallery, Japanese courtyards surrounded by koi ponds, and a pair of indoor tropical gardens.

It’s highly secure, with a security guard and a roving boat patrol, he said.

“This is the best site in the neighborhood,” Mr. Alexander said. “It sits on a wide open bay, facing west so you get sunset views.”

The house is close to “Bal Harbour Shops, which arguably has some of the best shopping in the world,” he said.