Double vision: a Miami home blurs the boundaries between urban and wild living 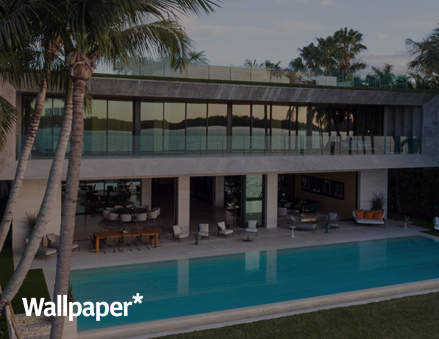 When Shlomy Alexander and his son Oren bought the last vacant lot in Bal Harbour, an exclusive neighbourhood just north of Miami Beach, in 2012, they knew they wanted to create something that was both spectacular and comfortable. The site was unique in that it appears to bridge two worlds – the front faces some of the most prized real estate in the United States, while the back looks out over Biscayne Bay and the primitive mangrove wilderness of Oleta River State Park. Gaze out at sunset and pelicans and dolphins may well show up, completely unperturbed by the city nearby.

The Alexanders wanted to build a home that embraced the duality of Miami’s subtropical setting, both its growing urbanity and its natural beauty. They approached architect Chad Oppenheim, who had also designed his own waterfront Miami home. ‘I’ve learned a lot by living in a house that I designed,’ he says. ‘You have to create the most incredible space possible.

'It’s about feeling, and feeling is timeless. It’s not about fad or trend or a cool material that everyone’s using.’ Oppenheim’s feel-driven ethos has resulted in a tropical modernist gem informed by both Japanese and classical tropes. An open-air ground floor blurs the boundaries of indoor and outdoor, while an elegant, wide rectangular frame forms the second floor, creating panoramic views. Such frames are a common theme in the architect’s work. ‘I’ve been playing around with these forms for ages, ever since I was in architecture school,’ says Oppenheim. ‘These boxes came from Donald Judd’s sculptures, the way they framed nature. The frame makes you focus on what’s there, as it would with a painting. And the Japanese played with sliding panels and framing views of nature, so these are the principles we use.’

The first thing you see when you enter the front door is an unobstructed view straight through to the bay. The next thing you notice is an Alexander Calder mobile turning slow gyres in the sea breeze. From there, the home opens up into room-vignettes that feel separate, but are visually connected to the rest of the house, and the water. The first floor experience really shines, though, when you retract the glass walls. ‘The idea is that the walls of the house begin to disappear and all you’re left with is the landscape,’ says lead project architect Kevin McMorris.

With the walls gone, room-size gardens jut into the space, creating a notion of Spanish courtyards draped with palm fronds. ‘You’re in constant conversation with the outside, with the view. That was the initial charge and thought for the house,’ says McMorris. Upstairs, the master bedroom’s 75ft window constantly connects you with the water rolling in on the tide.

Oppenheim designed the home to be made almost entirely of three materials: American oak, which forms walls, ceilings, doors, cabinetry and floating staircases; Roman travertine, which runs from the entrance all the way through the house to the bottom of the glass-walled swimming pool; and glass, much of which is retractable. ‘Sometimes I feel that I’m not skilled enough to use more than a few materials,’ jokes Oppenheim. ‘I like to use noble materials, things that show themselves and their natural characteristics.’ He notes that he and the Alexanders worked hard to get the right tactile matte finishes throughout, unusual in Miami, a town with lots of shiny white homes. ‘We try to create a limited palette – neutrals let you focus on what’s in the frame,’ he says.

‘In a way it’s as classical as it is modern. There are courtyards, there are loggias, the power of the symmetry,’ continues Oppenheim. ‘These things are comforting to me.’ And comfort was a goal from the start, as the house is intended as a real home, a retreat, not a trophy space for events. ‘I try to avoid labels,’ he says. ‘But I guess in a way it’s the notion of romantic minimalism – romantic in that it’s designed for pleasure. It’s not architecture for the sake of architecture. It’s architecture that just celebrates the beauty of a place.’