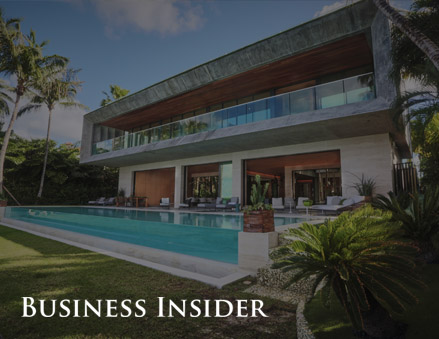 Welcome to Miami, home of the fabulously beautiful and fabulously wealthy.

Foreign buyers — many of them anonymous — have poured cash into Miami's real-estate market for years. Think mansions priced at over $20 million, condos pimped out with private rooftop pools, and spec houses with wild extras. Big-name architects like Renzo Piano, Rafael Viñoly, and Zaha Hadid are knee-deep in the Miami property game, turning the city's skyline into a feast of postmodern towers.

A recent report from RealtyTrac noted that real-estate transactions in South Florida hit a record in 2015, closing 114,002 single-family home and condo sales.

"It's a buyer's market," luxury real-estate broker Oren Alexander of Douglas Elliman told Business Insider. Alexander and his brother, Tal, are known for listing high-end properties in New York and Miami, including the $50 million penthouse at the top of Manhattan's Plaza Hotel.

"There's no bigger transfer of wealth than from New York to Miami right now," Alexander said.

But lately there's been talk of softening markets in New York and Miami. Some have said there has been a slower influx of foreign capital thanks to a weakened Brazilian real and Russian ruble. Meanwhile, stricter regulations on all-cash, anonymous real-estate purchases — a favorite of foreign investors — have been introduced, potentially throwing some cold water on the boom.

Let Business Insider be your guide to some of the most noteworthy pieces of property in this beach paradise:

Just south is 252 Bal Bay Drive, an independent residence developed by Alexander and his father, Shlomy. Priced at $36 million, the waterfront estate can also come with a Jaguar and a yacht. The last time this team worked together on a spec house — at 3 Indian Creek — it sold for $47 million, which in 2012 was a record for Miami.