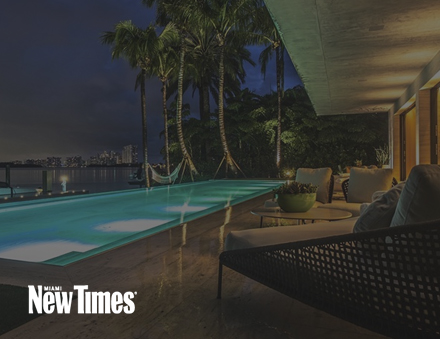 Are you a rich person who lives elsewhere but is interested in becoming an Official Miami Rich Person? Well, it's not always that easy.

There are a lot of things you have to acquire before you become a true Official Miami Rich Person. First of all, you need the mansion. Naturally. It's best if the crib is something modern and white with lots of glass designed by a bold-named architect. Obviously, it should have a cool-ass pool and a hot tub. And if it's not directly on the water with a private dock, why even bother? Of course, you'll need a yacht to put out on the dock, plus a cool car in the garage to drive around town — preferably something exclusive and with a convertible top.

But even that's not enough anymore. You'll be living in Miami. Miami Rich People love to pretend to care about art. So you'll need at least one work by a major artist so well known even grandmothers have heard of him.

Of course, acquiring all of those pieces separately can be hard work. Well, good news! One developer is offering a bundle package, a "Miami Rich Person Starter Kit" if you will, for the relative steal of just $43 million.

Real-estate agent Oren Alexander and his father Shlomy have teamed up on a Bal Harbour Island spec home that includes all of those things.

“The people who are in this league — they want one less headache in their lives,” Alexander tells the Wall Street Journal.

Here's what you'll get for that $43 million:

One (1) Bal Harbour Mansion Designed by Chad Oppenheim
The digs come complete with eight bedrooms, nine bathrooms, and one half bath. They also feature two koi ponds and facial recognition technology at the front door so you'll never need a key.

One (1) Andy Warhol Screen Print from the Unknown Female Series

Of course, if you don't want all of those extra goodies, you can simply buy the property itself for $36 million.