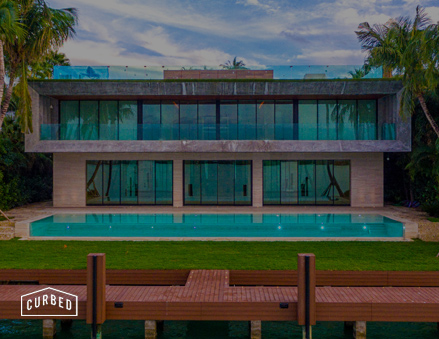 The stunning contemporary continues its news-cycle seduction after being featured on the cover of the May issue of Maxim, with supermodel Sara Sampaio posing in the pool wearing only her birthday suit.

It also released a new drone video, allowing you to take a full-blown tour of the most expensive home for sale in Bal Harbour. It reveals a hot tub and bar on the roof among other dynamic offerings.

"Gilles Bensimon, the legendary photographer, scouted all of Miami trying to find the right place for the cover of this special edition of Maxim, which is all about the best of Miami," says Douglas Elliman's Oren Alexander of the Alexander Team, who has the listing. "Initially we declined, as we refuse to do any commercial activities at the house. But after meeting with Gilles and Maxim we understood that this is not the same magazine I grew up on but completely revamped and probably the most elegant and sophisticated men's lifestyle magazine in the world."